A group of 58 flight students at Embry-Riddle Aeronautical University were able to reduce the time it took them to complete a first solo flight by more than 30 percent, thanks to a first-of-its-kind general aviation flight training program.

While results remain preliminary, reports from instructor pilots have been positive, said Dr. Ken Byrnes, chair of the Flight Department at Embry-Riddle’s Daytona Beach, Florida, campus. “Students who go through our new training program are better prepared when they step into an airplane,” Byrnes reported. “They also have lower anxiety and greater confidence due to their experience and understanding of what to expect in the aircraft.”

The PILOT, or Pre-flight Immersion Laboratory for Operations Training program, an evidence-based approach that can save flight students time and money, was launched by Embry-Riddle in fall 2021.

Embry-Riddle Flight Training Manager Nicole Hester agreed that the program is paying off. “We have had students who finished and soloed in times that we have never seen before,” Hester said. “We’re also getting feedback from our instructor pilots that students in the new program can immediately control the airplane and understand radio communications very well.”

As Embry-Riddle has been faced with heavy demand for its highly regarded Aeronautical Science degree program, “The idea was to increase capacity by increasing efficiency,” said Dr. Alan Stolzer, dean of the school’s College of Aviation at Daytona Beach. “We also wanted to enhance student learning, improve aviation safety and help industry address a critical shortage of qualified pilots.”

“We believe that this is the first use of these VR technologies for general aviation training,” Byrnes said.

The VR software helps students leverage what they learned during simulator and oral activities by focusing on a three-step learning process – read, watch and do.

First, the student will read a short pre-flight briefing that gives them the essence of the material they need to know before each “mission,” or flight lesson. As a second step, the student will watch a video with the maneuver or task being performed. In this way, they get a visual on the objective, along with supplemental information on the maneuver or task itself. Third, students put all of their knowledge together in a high-resolution, interactive simulation. The simulation allows them to fly, applying everything they’ve learned until they gain mastery.

“We can make about fifty things go wrong with the aircraft as the student completes the virtual pre-flight inspection,” said Robert L. Thomas, assistant professor of Aeronautical Science. “That is an extremely useful learning experience because in the real world, our aircraft are serviced with a goal to prevent any problems.”

Students are also able to practice and learn checklists in a more immersive environment before they move on to the real aircraft.

Embry-Riddle’s PILOT program also features a virtual Air Traffic Control (ATC) lab. There, students ride along with a 360-degree video of a real flight with a virtual instructor. The instructor introduces students to a variety of flight scenarios in complex environments such as a busy arrival to Daytona Beach International Airport. Throughout the video flight, the instructor explains what’s being said over the radio and how that corresponds to actions the student must take.

On real-world flights, explained ATC course designer and Aviation English Coordinator Andrew Schneider, instructors have little time to stop and review what’s happening via radio communications, step-by-step. In the Embry-Riddle simulation, students can listen without distraction to radio communications between the instructor and ATC, learning phraseology and developing listening fluency.

Students can then practice talking on the radio in another VR training. The Pilot Phraseology Trainer (Pilot PT), developed by Advanced Simulation Technology inc. (ASTi) of Herndon, VA, helps students practice radio calls at their own pace, focusing on repetitive listening and speaking accuracy with simulated ATC.

In the final stage of radio training, students enter a VR flight so that they can test their skills in ASTi’s Simulated Environment for Realistic ATC (SERA) training technology. As they speak with ATC, the SERA system uses artificial intelligence software to react to what the student pilot is saying as their flight progresses, correcting them when they make mistakes.

For example, Schneider said, “The student pilot will hear and see that there is a Delta flight leaving the ramp. They must communicate in the midst of other pilots communicating, and the AI environment is reacting in real time to what the student says.”

After four weeks of virtual training, Byrnes said, “Students go to the airplane and fly every day, whereas traditionally they wouldn’t fly that often. We’ve given them all the information they need, all the tools and practice, to start applying new skills in an actual airplane environment before they ever get there.” 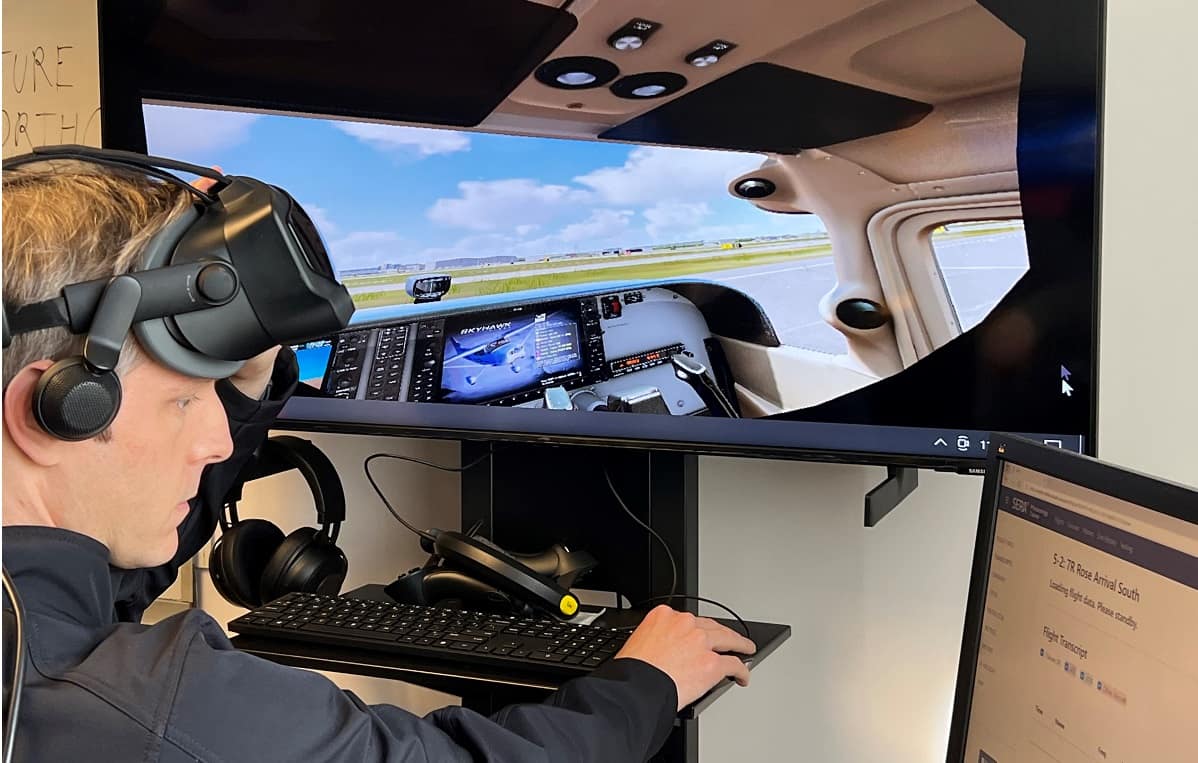